Food Fare's collection of e-cookbooks just keeps growing. So take your pick and get cooking!

The Ambrosia Cookbook contains more than 200 recipes in all categories, along with special dishes for holidays and vegetarians, and easy-to-assemble herb and spice mixes. More >>

The long-awaited and elegantly-appointed Food Fare Cookbook contains the cream of the crop from the Food Fare web site, including more than 200 distinctive and original recipes. More >> 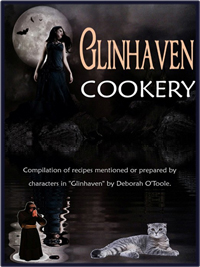 Glinhaven Cookery is a compilation of more than 45 recipes mentioned or prepared by characters in the gothic fiction novel Glinhaven by Deborah O'Toole.

The cookbook will be available as a free download from Amazon when the novel Glinhaven is purchased after it's release in 2020. More >>

In partnership with Food Fare, the Larkin Community Cookbook is now available in Kindle, Kobo and Nook editions.

The Larkin Community Cookbook is a compilation of more than 40 recipes mentioned or prepared by characters in the eight-part fictional epic known as the Collective Obsessions Saga by author Deidre Dalton. More >>

Food Fare's Soups & Stews Cookbook features more than 170 recipes for unique as well as traditional soups and stews from across the globe. More >>