"IN THE SHADOW OF THE KING"

HOURS LATER, AS he lay in his bed listening to the steady downpour of rain, Francis allowed his mind to wander back in time. Although it seemed ages ago, he recalled meeting Henry VIII when they were children. Henry's father, King Henry VII, brought Francis and a few other noble children to Windsor Castle for a few weeks during the summer of 1500 so that his son could have suitable playmates.

Prince Henry had only been nine years old at the time, but was already sports-minded. Francis recalled long days of fencing, archery and wrestling, along with rides in the country astride royal horses, and fulsome suppers to end the days. Yet the four young boys didn't just lavish their time with sports activities. They also discussed philosophy, religion, poetry and other writings.

Francis tried to recall Prince Henry's physical appearance, but the memory was vague. He knew the prince was tall with red hair, but could not remember exacting facial features or other physical traits. The brief time he had spent as Prince Henry's playmate was akin to a flash in his mind - a blur of red hair and bustling activity.

Francis then thought about what his father had said to him earlier in the day, and what it would mean for him.

"Father fears for me," Francis thought with a sudden clarity. "He feels as if he is throwing me into the viper pit, but he has no other choice. What else could I do with my life? Stay here at Marsworth, marry a local mouse, and father a passel of brats? Then eventually die myself and pass all of this onto my own son? What kind of life would that be? A shameful waste, that's what it would be."

Francis was certain his future was at court.  He knew it deep in his soul. His only way to a life beyond obscurity in Buckinghamshire was to go to court. With trust in such a conviction, Francis knew his future and his destiny would be centered around Henry Tudor, King of England, who would perhaps be Francis' salvation. 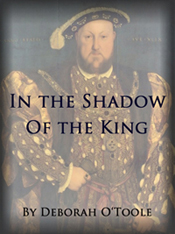 < Back to "In the Shadow of the King" by Deborah O'Toole