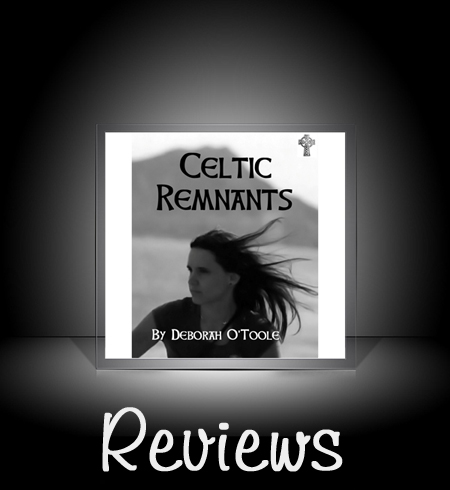 "Celtic Remnants is well written, and I love the book cover...well done!"

- Steve Oliver, author of Thunder Across The Valley

"The writing in Celtic Remnants is flawless...the plot flows smoothly and the hook is deep. High stars!"

"Celtic Remnants is a very full account of Irish life at a crucial point in history...

The beginning of 'The Troubles' in the lives of ordinary people, which I fear one day may return."

- Strachan Gordon, author of A Buccaneer

I also like the story itself - it is different and real. Good work!"


Celtic Remnants by Deborah O'Toole from Barbara Cerda on Vimeo.

"Celtic Remnants impressions: The event. The Bogside Massacre. Bloody Sunday. Derry Northern Ireland, 30 January 1972. One heartless moment of violence and subsequent retaliation against bigotry will last for generations. The emotional scars created in this day has lasted for generations. Eventually, the hatred tears the love between a young English son of an Earl and a bonny Irish girl. This novel is quite a read. A masterful weaving of a love story that nestles nicely within remnants of Upstairs Downstairs, Poldark, and finally Downtown Abby. To me, the author speaks grandly about how the post World Wars have altered the cultures of British Royalty and Ireland. Not a new story but one haunted by centuries-old hate and bigotry. Although not an easy read. I think Anglophiles will crush on the detail of this work that is memorable. Well crafted characterization may slow the reader's progress in the beginning. But the emotional force conveyed when the author seamlessly transitions from love scenes to heartbreaking moments is surprisingly memorable. It is because of this author’s incredible skill and grace in storytelling that it serves well in telling of Celtic culture and its brutal struggles to achieve autonomy under British rule.

"Story/Plot/Conflict: This is a love story that finds its beginnings with tragic remnants that scars the soul of a young Irish girl, robbing her of family and home. Part of a closely-knit Irish family, the child Ava Egan learns first hand the brutality of the British military. Hatred spawned from unjust violence, murders, and civil unrest darkens the heart of Ava. Until years later, as a young woman, she meets and falls unexpectedly in love with David Lancaster, eldest son of a belted English Earl. With a soul steeped in the old traditions of English nobility, David and friend Bart Quantrill unexpectedly find love with two Irish girls. Only to lose that love in the cruelest of ways. The chance meeting in a small Irish pub changes the hearts and lives of four people. While one is forced to throw away a love that strengthens his heart. And makes him question the morality within a world of privilege. Ava returns home to Ireland broken and filled with hate. Following family traditions, she chooses to fight to break the yoke of British rule that destroyed her life. This author weaves a tale of how bigotry and complacence created a world of violence and tragedy. Yet within the dreadful throes of violent civil unrest, loves springs real and lasting."

< Back to "Celtic Remnants" book page